The new war against Chabad in Lithuania. History repeating itself? 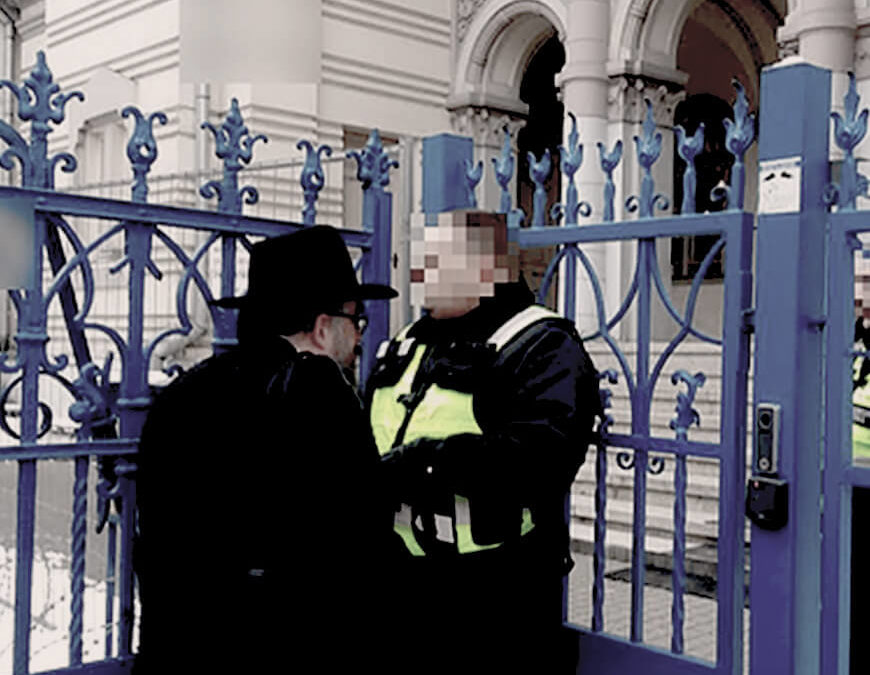 History is replaying itself in Lithuania’s small Jewish community of barely four thousand souls. Yet, the intense optimism and vigour characteristic of Jewish life during the Jewish Renaissance of the late 18th century are sadly not embraced by the gatekeepers of Lithuanian Jewish society in today’s Vilnius. Once known as “Jerusalem of the North,” Vilnius has instead become a city where Jewish religious life has fractured into a new type of bureaucratic discord.  The heart of the Litvak world has been struck.

Contemporary tensions hark back to the 1770s, when the Haskalah, the Jewish Enlightenment, began gaining sway in Lithuania. Based on intellectual rationality and secularism, the Haskalah encouraged the incorporation of the study of modern languages and the sciences into the Jewish syllabus. It effectively led to a splintering of the monopoly that the rabbis had on education, and thus to Reform Judaism, and modern Zionism. The Haskalah protagonists, the maskilim, created an irreversible dislocation in the enterprise of traditional Jewish education and life in Lithuania and in Eastern Europe generally.

While the maskilim fomented the secularisation of traditional Jewish scholarship and education in Lithuania two hundred and fifty years ago, the rapid ascendancy of Hassidism sought to challenge the orthodox Litvak approach from another perspective.  The leading rabbinic authority of his time Rabbi Elijah b. Solomon Zalman, “the Vilna Gaon”, was instrumental in leading opposition against Hassidism, fuelled by deep suspicions that they were false messianists. This opposition was fierce as it sought, through formal denunciations, the public burning of Hassidic writings and the arrest and jailing of Hassidic adherents, and to extinguish Hassidim from Jewish communities in Lithuania by any means.

After the Vilna Gaon’s passing in 1797, the wholesale onslaught against Hassidism in Lithuania began to subside. But the maskilim accomplished their mission of infiltration by sowing divisiveness between the established Jewish community and Hassidism, exploiting the fragilities of community fragmentation to enhance and concretise their own agenda.

In today’s Vilnius, tensions between the Lubavitch Hassidic movement (Chabad) in Lithuania and its Jewish detractors have been reignited.  Ironically, it is the Lithuanian Jewish Community’s (LJC) chairperson and co-chairperson of the Good Will Foundation (GWF), Faina Kukliansky, a former Soviet prosecutor and lawyer, who is at the centre of this divisiveness.

Rabbi Sholom Ber Krinsky, the Chabad representative in Lithuania, has become the target of harsh criticism and ostracisation by the LJC and, in the process, a pawn in a power struggle orchestrated by Kukliansky.

According to esteemed Yiddish scholar and cultural historian of Lithuanian Jewry, Professor Dovid Katz, since Krinsky settled in Vilnius in 1994, Chabad has provided the vast majority of religious services to Lithuanian Jews in the city. To say the least, his unstinting commitment, often under trying circumstances, to Jewish community upliftment and religious education, is widely respected internationally.

Yet, on 28 October 2016, Rabbi Krinsky was prevented from entering a Jewish community centre which, due to the extended closure of the city’s main synagogue, was functioning as a house of worship that day. This was a recurrence of a similar violent debarring of Krinsky from the Choral synagogue, the only functioning shul in post-Holocaust Vilnius, in 2004 by Kukliansky.  The LJC had hired guards to prevent Krinsky’s entry and, according to witnesses, police forces were also called upon to forcibly remove Krinsky’s supporters – including his young sons – from the community centre on the eve of Shabbat.

The incident, which drew widespread anger, was recognised as “an open expression of the quiet resentment of Chabad held by some members of several small Jewish communities in Europe,” as The Times of Israel described it.  Katz said that the lamentable incident came “after many years of blissful peace at the one functioning pre-war synagogue in Vilnius”, and noted that there had been no provocation of any kind to begin to justify Krinsky’s deplorable treatment.

Kukliansky’s personal vendetta against Krinsky is clearly manifest. Observers have pointed out that this is likely to have its origins in Krinsky’s popular petition, addressed to the board of the GWF to stop the boycott of the country’s only remaining religious Jewish school. A severe lack of funding recently led to the school falling into debt.

The Good Will Foundation was ostensibly established to support Lithuanian Jewish life, of which education is an unquestionable pillar. Its declared mission is “to distribute funds provided by the Government of the Republic of Lithuania for the religious, cultural, health care, sports, educational and scientific goals pursued by Lithuanian Jews in Lithuania in a transparent, fair and effective manner.”

Krinsky has not received a cent of the 3.7 million Euros received per annum from the Lithuanian government by the GWF. Katz observes that it is “Lithuania’s Jewish community who are supposed to be the beneficiaries of the funds, which derive from the pre-war religious properties of the annihilated Jewish community of Lithuania.”

Yet the institutions, schools, and charitable organisations – including a soup kitchen for the poor of Jewish and non-Jewish faith – for which Krinsky tirelessly fundraises and operates have so far been denied any support from the GWF.

An unrelated furore concerning the fate of Vilna’s 15th century Jewish cemetery has strangely pitted the LJC’s leaders against the clear wishes of the community, and contributed to the sense of disenfranchisement and powerlessness felt by Lithuania’s Jewry today.

Plans to build a national convention centre over the oldest Jewish cemetery in Lithuania were met with public protest by prominent Litvak rabbis around the world. A petition filed by Ruta Bloshtein, an orthodox member of Vilnius’ Jewish community, was signed by tens of thousands of supporters of different backgrounds and faiths. As Bloshtein pointed out: “Because of the Holocaust and the murder of around 99% of Vilna’s Jewry, the buried people, whose families paid honestly over centuries for their perpetual place of rest, have no local descendants to take up their cause.”

That the LJC’s leaders would persist in standing alongside the Lithuanian government to support a project that brings distress to the community whose interests it is purported to represent is puzzling to say the least. But Kukliansky took it even further and fired Chaim Burshtein, the (LJC-appointed) chief rabbi of eleven years, accusing him of “spreading lies about the Šnipiškės cemetery in Vilnius” when he merely exercised his right to make his views heard.

As Katz has pointed out, “two polarically different branches of East European Jewish orthodoxy, Litvaks and Satmar hasidism, were now in full agreement condemning the planned desecration of one of Europe’s most famous Jewish cemeteries”, a fact that the LJC wilfully and arrogantly ignores.

The flames of divisiveness were fanned in Vilnius when, on 7 January 2017, the Sabbath was once again “shamelessly disrupted”, as one worshipper put it. Security guards and back-up vehicles barred Krinsky from Sabbath morning services at the community centre. Once again, no rational explanation was provided. The official religious community’s two widely admired leaders, Simas Levinas and Shmuel Yusem were not present. It is speculated that they did not wish to be present for the eviction of one of the congregation’s stalwarts, having worked closely with Krinsky for several years.

But the excessive authoritarianism that characterises Kukliansky and her cabal – and that which Katz has referred to as the “militarization of the synagogue” –  proved ineffective on that January morning. Several worshippers instead joined Krinsky and held the Sabbath morning service at Chabad House on Bokšto Street.

Bloshtein – courageous initiator of the petition calling for the relocation of the planned convention centre – wrote about Kukliansky’s curious behaviour in a blog post, saying, “The chairperson chose to show up the next day during the Shabbos meal in the Chabad House, where she was welcomed like any other Jew. She was invited to speak, and she even gave something of a cordial speech there. Yet the very next day she posted an article about ‘how Rabbi Krinsky is dividing the Jewish community.’”

Bloshtein observes the “the laughable pretence that there are some ‘unsolvable issues’ between Hasidim and Misnagdim that prevent praying together.”  Perhaps this is exactly what Kukliansky has tried to accomplish, attempting to discredit the Chabad influence on local religious norms and Krinsky himself in order to maintain a monopoly on GWF fund distribution.

A list of recent allocations by the GWF reveal that several thousand euros will be disbursed to the Israeli Philharmonic, a statue of Gandhi and Kallenberg, and a multimillion dollar New York academic institute – and, let us not forget, the state-of-the-art security guards that support personal vendettas against Krinsky and his family. Yet a Jewish educational institute operated by Chabad in a country without any other is condemned, unworthy of financial support.  Other projects, vital for the survival of Lithuania’s rich Jewish heritage, including those of Katz, should be made recipients of GWF funding.

There is no rational or legal basis for Krinsky and his programs to be excluded from receiving restitution funds from the Lithuanian government. As this truth spreads to the corners of our global Jewish community – from Lithuania to South Africa – I am hopeful that the prejudices and subterfuges that are threatening the Jerusalem of Lithuania’s fragile community will become ever more apparent to the world, and that peace will once again prevail in the cradle of Litvak Jewry.