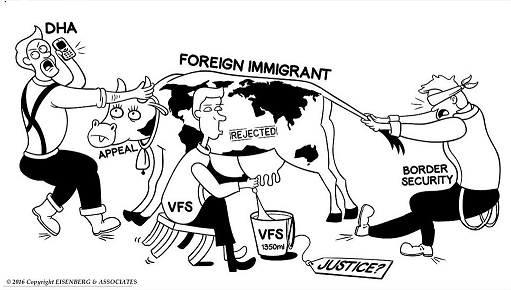 Legal proceedings against the Department of Home Affairs (‘the Department’) and its contracted visa application service provider, VFS Global, have been instituted in the Cape High Court with the objective of challenging the legitimacy of the appointment of VFS, the lawfulness of its service fees, and the lawfulness of the immigration rules which prohibit foreigners, including foreign spouses of South Africans, from changing their status in South Africa.

This comes after VFS refused to accept several visa applications to enable foreign spouses to remain in South Africa, and after it was determined that foreigners had to pay VFS service fees to have Departmental mistakes corrected.

According to Gary Eisenberg, immigration lawyer at Eisenberg & Associates, this legal action aims to subject the entire immigration scheme to judicial review based on its adverse impact on foreigners and the legal abnormalities inherent in the new system.

The appointment of VFS to receive and manage visa and permit applications in South Africa;

The appointment of VFS to act as the front-end visa administrative function for the Department came into effect on 20 June 2014. According to the Minister of Home Affairs at the time, the appointment of VFS hoped to receive and manage visa application outcomes efficiently and in a timeous manner.

As a consequence of the appointment decision, however, the Department now refuses to accept any applications made directly to it – with all applications now being made via the offices of VFS. While the goal may have been to improve the efficiency of the application process, applicants now have to pay an additional fee to VFS, which is currently R1350 per person per service.

“The problem with this is that this fee is not provided in any regulation or law, and is in addition to the administrative fees already prescribed in the Regulations on Fees to the Act,” says Eisenberg. “This fee is even applied in cases where an application, such as in the case of appeals, should be a free service.”

Eisenberg argues that according to the Act, the Department is not allowed to delegate its duties to receive applications directly, particularly not to private companies who may charge unregulated fees that have no basis in the law, are inconsistent with the purposes of the Act, and grant VFS with vague and unlimited discretion to charge applicants wishing to receive vital government services whatever it sees fit.

The second problem that the legal action deals with is Immigration Regulation 9(9) which prohibits foreigners from changing their status in South Africa while in possession of visitor or medical treatment visas.

“Further to the argument around the appointment of VFS, the second of the issues addressed within the legal proceedings deals with sections in the Act that only allows foreigners to remain in South Africa on a visitor or medical treatment visa to renew their visa only in exceptional circumstances.”

In its current form, that the Regulations do not allow members of the immediate family of persons lawfully in South Africa (either SA citizens or permanent residents) to remain in the country while renewing or changing their visas. “What this results in is that these individuals have to leave their families, often for months at a time, in order to apply for their visas and await the outcomes of their applications outside of South Africa.

“These issues unreasonably infringe on the right to family, which is a key component of the right to dignity upheld by the Constitutional Court. We are hoping that the court action will result in the regulations to be recognised as being inconsistent with the Constitution and be ruled as invalid.

“The way in which foreigner visas are currently handled in the country and the unlawful fees that are charged by VFS have a massive impact on our local economy. This in turn impacts the inflow of critical skills needed in the country, on the tourism industry, on international business, trade, cultural, sporting and academic links and, more importantly, on the growth and development of South Africa.”

The Department has the responsibility to manage immigration effectively and securely in the best interest of the nation in order to advance the socio-economic development of the country, adds both Eisenberg and de Saude.

“Without an urgent review of both of these issues, countless foreigners who contribute to our society and economy will be recognised as illegal, which could result in their arrest, detention and deportation from South Africa. “