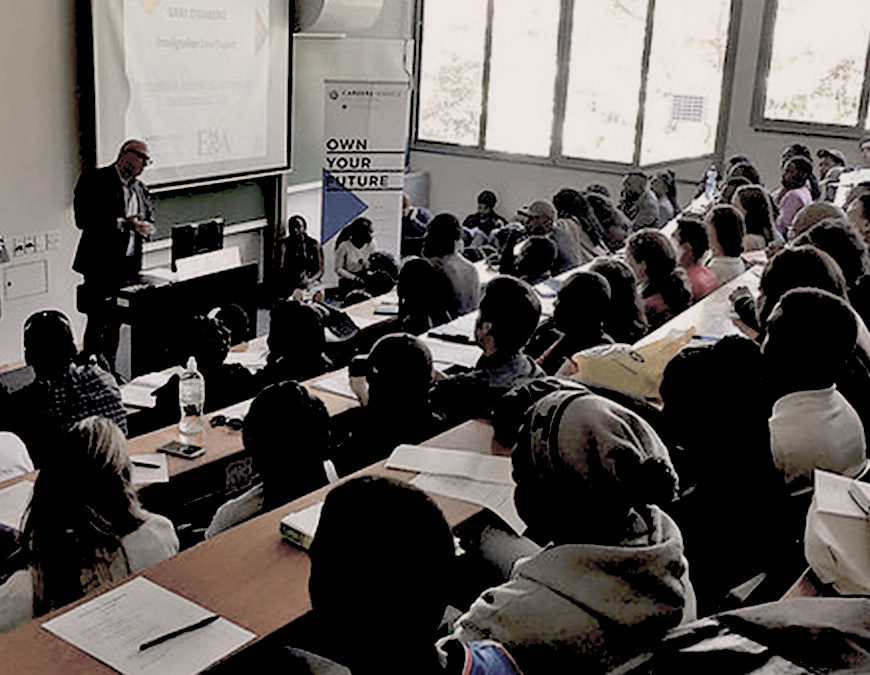 Strategies to stay on in South Africa following graduation from the University of Cape Town (UCT) was the subject of an address by immigration lawyer Gary Eisenberg, who unpacked the details of a new ministerial directive in respect of securing permanent residence for international students.

International students from UCT and tertiary institutions countrywide could benefit from Home Affairs Minister Malusi Gigaba’s recent announcement that allows anyone with a degree from a South African institution “in a critical skill” to immediately apply for permanent residence following graduation.

The talk, organised by UCT’s Careers Service, was aimed at helping these students navigate the bureaucratic hurdles around obtaining a South African work permit. The new directive is intended to encourage skilled migrants to work here, giving South Africa the chance to retain skilled foreigners.

Addressing the issue of the time delay between the end of their studies and actual graduation in April the following year, which leaves students without valid permits to remain in South Africa, Eisenberg said applying for permanent residence on the basis of having a degree in a critical skill requires graduates to be in possession of their graduation certificates.

Applications for critical skills visas also need to be accompanied by a graduation certificate.

“Your prospects of being able to apply for a critical skills visa in South Africa are about zero. In most cases, you’ll have to go home to apply,” he warned.

He told the students these applications could be made at consular offices abroad, but advised against this route because unlike temporary visa applications, permanent residence applications are sent to Home Affairs in Pretoria for adjudication. Because they are unlikely to be tracked or traced, there’s little recourse if an application is lost in the system. Long wait for approval.

A further hurdle is that applicants are required to hold valid permits in South Africa while they await the outcome of the permanent residence application, which could take as long as two years.

“If you’re a student in the Humanities Faculty – including psychology and law students – your degree is not on the critical skills list. You need to decide how you’re going to get into the job market,” Eisenberg told the packed venue.

“If you’re a law student, you need to drill down and start working on a solution for doing your articles.”

He said the requirement that skilled graduates have to travel to and from their countries to secure a work permit is a bureaucratic hurdle that could be removed by Home Affairs.

Eisenberg said the Department of Labour protects the South African labour market from the influx of foreigners.

“For every foreigner that comes in, they take a local job – that is the perception, whether or not it’s true. That’s the political climate we’re in.”

This article was originally published by UCT News