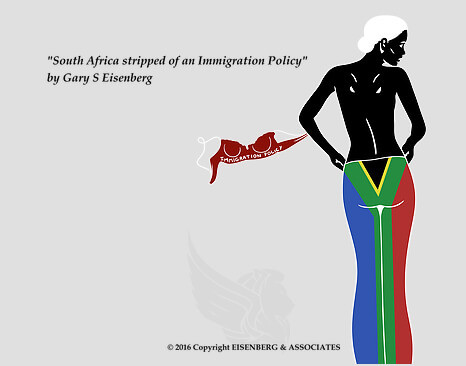 South Africa no longer has an immigration policy. This is not a statement of criticism, but a jurisdictional fact.  On 26 May 2014, when the Immigration Act was amended, an entirely new paradigm of immigration regulation came into operation, unprecedented in its inflexibility and in its exclusionism.  This is not a phenomenon that suddenly appeared out of nothing but it emerged from a history of administrative corruption, the violation of South Africa’s borders, and Government’s frustrated response to it.

The foundations of Government’s frustration lie its realization that perhaps 15-20% of South Africa’s permanent resident population are imposters.  These are foreigners who misrepresented themselves as offspring of at least one South African citizen parent or who acquired permanent residence documents by fraud.  It was a common practice for foreigners, mostly from neighboring countries, to falsely represent themselves by affidavit as the unregistered offspring of South African parents and thereby easily had their births registered with the Department of Home Affairs (DHA).  More stringent protocols making these late birth registrations more difficult came much later.  It was also common to acquire the right to permanent residence through misrepresentation,  bribery, and fabrication.  These practices occurred when decision-making was decentralized to the provinces.  Today these impersonators use South African identity documents and are accepted as native members of our population.

South Africa’s minister of Foreign Affairs who had borne the brunt of British dissatisfaction with the level of corruption within the DHA civic services directorate, responsible for passport processing and issuance, was Nkosazana Dlamini-Zuma.  When she became Minister of Home Affairs in 2008 she took it upon herself to eradicate that corruption and to restore law and order within the DHA.  In May 2010 all decisions on immigration applications were centralized at DHA Headquarters in Pretoria and a security cordon began to be spun around that hub. Since the operational systems were not properly in place when the centralization project began between 60-70% of all applications submitted at DHA offices were lost and could never be traced.  This trend continued into 2011.  With a flood of litigation ensued to resolve the paralysis it became patently clear how deep rooted the administrative bungling was. By then the conservative “old-style” civil service had hemorrhaged from the DHA leaving in its vacuum a public administration largely uneducated and inexperience, which became a glaringly important deficit in light of more complicated regulations coming into force.

With the publication of the last amendments to the Immigration Act in 2011, it became patently clear that an immigration policy was beginning rapidly to evolve into a border security policy.  The cost of heightened inefficiency within the DHA coupled with an increasingly intolerant administrative attitude, began to encroach on foreigners like never before.  This trend was reinforced by the DHA’s increased inclusion into the so-called security cluster, together with correctional Services, state security and defense.  With cadre deployment within the DHA, strip clubs were pursued with vengeance because human trafficking became a central focus of immigration control, distorting and replacing the DHA’s previous emphasis on the facilitation of entry of  foreign workers, entrepreneurs and retirees.

On 22 May 2014 the amended Immigration Act with its regulations were published with a commencement date of 26 May, leaving the public with a single business day’s notice to prepare for the extensive changes which the amendments brought into force. Once the new regime commenced, it was not until mid June that applications could be submitted through VFS, contracted by the DHA to serve as its “front counter”.  The new system has little redeeming character, both in terms of substance and the manner in which the DHA has applied it.  These are some of its distinguishing characteristics:

The Conference Board, an internationally respected research organization, has concluded that South Africa is experiencing negative GDP growth, together with Zimbabwe and Ghana, lagging dangerously behind all other Sub-Saharan economies.  Professor Edmund Ferreira of UNISA has found that since 1967, “output per worker per unit of capital in South Africa has fallen from R7 297 to R4 924 a year – a decline of 32.5%. From its peak in 1993, this measure of labour productivity has fallen by 41.2%, bringing it down to the lowest level in 46 years. South Africa today is less efficient than many of its emerging market competitors, its labour force is uncompetitive and labour productivity is much lower than that of the rest of the developing world.”

South Africa’s current immigration system blatantly protects South Africa’s labour market from immigrants on the assumption that foreigners are a threat to it.  This protectionism is the product of South Africa’s political machinations, not empirical research.  The overwhelming conclusion of current research confirms that immigrants do not crowd out domestic employment opportunities but add to employment.  Moreover,  immigration increases total factor productivity significantly.

South Africa’s border security policy is unsustainable because the costs of unimpeded productivity declines out way the gains from excluding foreigners.  The sooner the Minister of Home Affairs realises that South Africa needs an immigration policy that is flexible and encourages the inflow of financially self-sufficient, entrepreneurial, and skilled immigrants the more likely South Africa will succeed to compete in the modern world.