Family unity prevails at last in the Constitutional Court! 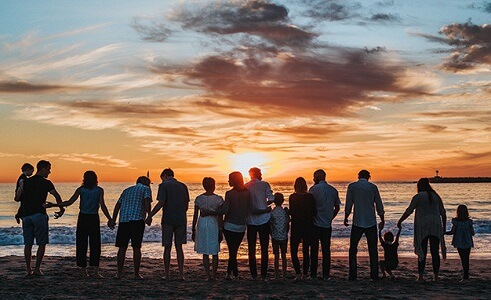 As of 28 June 2019, foreign spouses and minor children of South African citizens or permanent residents in possession of visitor visas are no longer required to return to their home countries to apply for and obtain long-term visas. This was the landmark judgment handed down by the country’s Constitutional Court, thanks to South Africa’s leading immigration attorney, Gary Eisenberg, who took the matter to the Western Cape’s High Court and, failing that, to the Constitutional Court for appeal.
The Constitutional Court ruled in favour of his four clients (two couples) who – along with every foreign spouse or minor child in the same situation – can now enjoy the dignity of cohabiting as a family, without unjustified and onerous requirements to leave the country for prolonged periods of time to apply for visas or permits.

On 28 June 2019, the Constitutional Court handed down one of its most important judgments relating to South African immigration legislation in 20 years.
The judgment was handed down to four applicants (comprised of two couples), represented by the country’s leading immigration attorney, Gary Eisenberg, who founded Eisenberg & Associates in Cape Town 22 years ago. Among the four applicants were two foreign spouses, Ugandan national Robinah Sarah Nandutu and Greek national Ilias Demerlis, who had been unable to apply for long-term visas within South Africa while being in possession of visitor visas, having exhausted their administrative appeals in terms of Section 8 of the Immigration Act.

In 2000, the Constitutional Court ruled that any law compelling foreign spouses to leave South Africa in order to lodge applications to change their visa status is an infringement of their right to dignity in terms of Section 10 of the Constitution, and therefore unlawful. But, when the latest amendments to the Immigration Act came into force on 26 May 2014, foreign spouses in possession of visitor visas could no longer change status in South Africa.

“In 2014, very stringent legislation was brought into force preventing foreign spouses of South African citizens and permanent residents from applying for a change of status when they enter South Africa on short-term visitor visas,” says Eisenberg. “This applied equally to minor children who would then have to return to their countries of origin to do so, and wait unlimited durations of time to acquire the relevant visas – only to return.”

Having exhausted all remedies in their appeals to the Minister of Home Affairs, the four applicants collectively sought to have Immigration Regulation 9(9)(a) judicially reviewed in the Western Cape High Court and declared unlawful and unconstitutional.

Regulation 9(9)(a) provides that only when the holder of a visitor visa is in need of emergency life-saving medical treatment for longer than three months or is an accompanying spouse or child of a holder of a business or work visa, can he or she change status from a visitor visa within South Africa. Foreign spouses or children of South African citizens or permanent residents, however, did not fall within the exceptional circumstances set out in Regulation 9(9)(a).

No longer are foreign spouses and minor children of South African citizens or permanent residents in possession of visitor visas required to return to their home countries to apply for and obtain their long-term visas, but may do so directly in South Africa. “This has an enormously positive impact on families’ dignity, as well as on their financial and emotional resources,” says Eisenberg.

Gary Eisenberg explains exactly what this Constitutional Court ruling means for foreign spouses, and how its effects will be felt by a large number of people, in these TV, radio, and print interviews: